The Dynex DX-TRPFLX is a neat little tripod.  I did see some reviews that said it didn’t hold bigger cameras well but the packaging clearly states that this is for compact cameras so I feel that wasn’t quite a fair assessment. 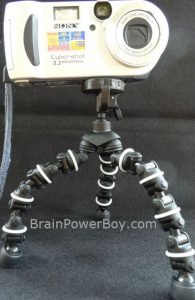 My son got this for doing stop action photos of LEGO scenes and so that he would have his own portable tripod.  We had a very large tripod which made it hard to transport or use for lower shots.

As you can see by my photos it held my older (and somewhat heavier) camera just fine. 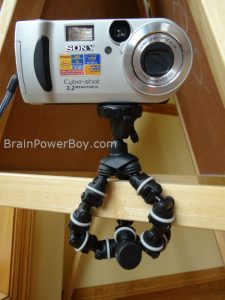 Flexibility is the main feature here.  Boys will love attaching this thing to trees, chairs, railings and other objects.  We found that when wrapped around an item it grips very well.  Of course, I would be careful that you have a very good wrap before letting go as you don’t want your camera to take a tumble. 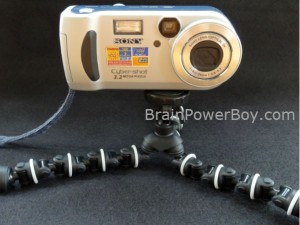 The legs really flex and can spread flat to get to a lower level for shooting.

It has a neat feature that allows you to remove the top plate so you can take the camera off the tripod to check pics etc. and then pop it back on.  Be sure to twist though or your camera will not be secured.   When the camera was attached to the plate it was hard to get it back on correctly and secured.  It would be better if there was a little colored tab or something so that you knew you had it in the right place.

It folds up small enough to take on the go in a backpack or medium camera case.  With this little tripod along for a trip we can get pictures of the family instead of me always taking them—and thus being absent from the mass majority of pictures we have J

All in all a pretty good little tripod for the price.

Shutterbugs, LEGO stop motion fanatics and those who would like a small, portable tripod.