These Wars and Warriors Historical Coloring Books are a neat way to learn about history while relaxing and coloring.

The warriors series includes warriors from Sparta, to Samurai to WWII. While the wars series covers the Revolutionary War, the Civil War, WWI, and WWII.

There are plenty of books to keep a history buff happy and learning a lot about wars and warriors.

Although these are coloring books, I am adding them to our best books for boys list because of the historical content contained in the books. 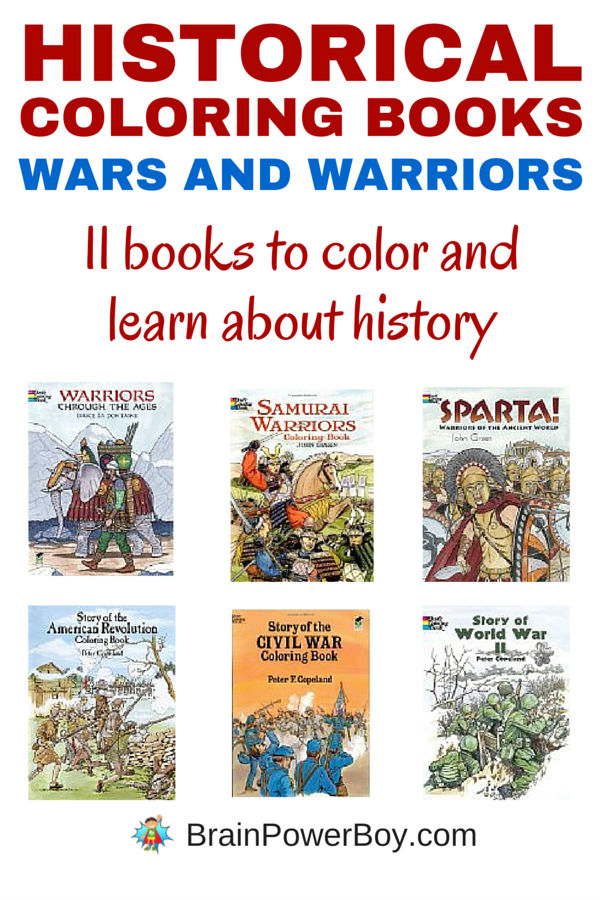 Pick up a few of these wonderful wars and warriors historical coloring books.  They are a great way to get a bit of history learning into your day.

Warriors Through the Ages

covers soldiers in history from the ancient warrior to World War II.  There are 22 pairs of opposing warriors on facing pages, e.g. a Roman Imperial legionary opposite a Carthaginian warrior. This is an interesting and engaging format.

Sparta!: Warriors of the Ancient World

Story of the American Revolution

and all the famous events surrounding it including Paul Revere’s ride, the Battle of Lexington, Fort Ticonderoga, Bunker Hill, the signing of the Declaration of Independence and many more important historical events. Highly Recommended

Heroes and Heroines of the American Revolution

The Story of World War I

This history coloring book covers the history of “the war to end all wars.” Battles, machine guns, weaponry as well as famous figures and historical events.

with its Japanese attack on Pearl Harbor, Stalingrad, Allied invasion of France, dropping of the atomic bomb over Hiroshima, the battles of Iwo Jima and Nagasaki, the fall of Berlin, is a good one to get.

Story of the Civil War

From Antietam to Gettysburg

The great battles and generals are included. The Union Army retreat and more in 45 scenes.

Find out exactly what the soldiers from the North and from the South wore during the Civil War. Color their uniforms and see their weapons. All 45 uniforms are shown in full color for reference.

A Soldier’s Life in the Civil War

Well-researched coloring book dramatically captures the danger, hardships, tedium, and lighter moments in the life of a Civil War soldier. 45 realistically rendered illustrations depict new recruits saying good-bye to loved ones, trying on uniforms, spending a relaxed evening in camp, posing for a photographer, facing a cavalry attack, and much more.